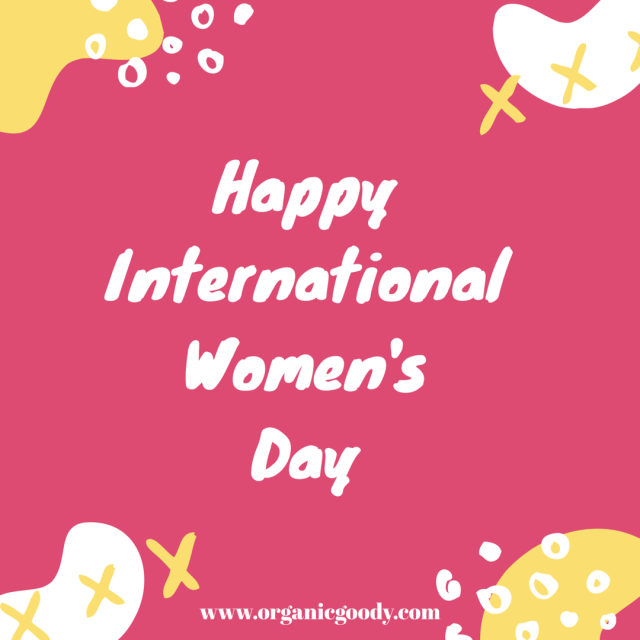 Celebrating achievements of women, uplifting women, empowering the next generation of women.

The world economic forum predicts that the gender gap wont close entirely until 2186!! That is so crazy and we wouldn’t even live to see it at this stage.

Here is why I marched in the Women’s walk on Washington March. It’s all aligned with why I choose to speak on this issue now as well. 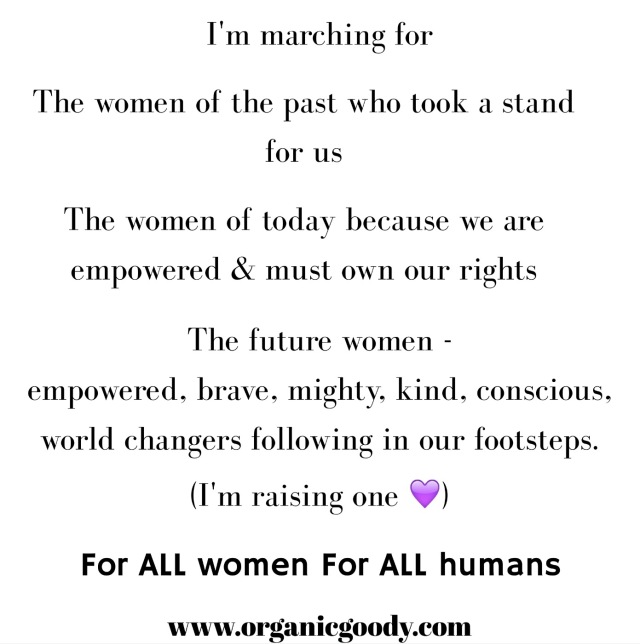 Gender equality is a worldwide issue but we see that in developing countries females are often restricted further in the opportunities that they are offered, education available. Often they aren’t treated equally socially, economically and can be thought of as ‘second rate’ citizens.

We must be the voice for those who don’t have the chance to stand up for themselves.

We can support charities and organisations, that are creating change in the developing world. They do amazing work by providing education opportunities, uplifting women and creating awareness around the many issues affecting girls & women.

You can help those most vunerable, move out of not just oppressing but often terrifying circumstances.

The sky being held up by all of us and half of us being women.

Without us obviously the sky would fall pretty damn quick.

I love the book Half the Sky: Turning Oppression into Opportunity for Women Worldwide.

Through the stories in Half the Sky, authors Kristof and WuDunn help us see that the key to economic progress lies in unleashing women’s potential. They make clear how so many people have helped to do just that, and how we can each do our part. Throughout much of the world, the greatest unexploited economic resource is the female half of the population. Countries such as China have prospered precisely because they emancipated women and brought them into the formal economy. Unleashing that process globally is not only the right thing to do; it’s also the best strategy for fighting poverty.

On the same line of thought.

I fricken love Marie Forleo’s speech from the  She’s the first awards night. Marie won the award for Mentor of the year.

Educating girls is the key to ending global poverty and healing our world.

Educating girls can break the cycle of poverty in one generation.

A girl who has an education will stand up for her rights.

She will empower her family she will strengthen her community and her economy.

But weve got a lot of work to do.

Because we have to dismantle the beliefs and the obstacles that block around 60 million girls right now from getting the education that they so richly deserve.

We have to put an end to gender related violence, to early marriage, to domestic slavery and the insidious long standing belief that girls just aren’t as important as the boys.

This is especially important now as there is a deep pain that exists in our society because women and girls have been so devalued by others and more than ever we have to come together to change that.

If we want to live in a more peaceful, just, equitable and kind world, that can’t be done without an uprising of strong and powerful women.

So today I want us to promise ourselves and each other that never again will we fail to recognise, how hard it is for every girl to face challenges in a world that often treats women and girls as second class citizens.

Oh my gosh Marie it was so good I had to quote the whole thing.  {full video here }

I love Marie any way but this speech is perfect.

My fave – Educating girls can break the cycle of poverty in one generation. {Click to tweet} Yes lets do it 🙏🏽

International Womens Day is currently celebrated in over 100 countries.🎉

It’s an official holiday in 20 plus nations including Afghanistan, Cuba, Georgia, Laos, Russia, Uganda, and Vietnam. In places like China, Madagascar, and Nepal, it is also a holiday, but only for women. So cool hoping it will one day be a national holiday in New Zealand.

The Women’s March organizers have declared March 8 ‘A Day Without A Woman’, with an international strike to take place in over 30 countries. Women are planning to speak up in a variety of ways, including taking the day off work, not spending any money, and engaging in civic action like calling their representatives.

Women all over the world are getting together to discuss issues on gender equality and how they can make change within this.

Both in real world and online speaking out on the issue, celebrating women, supporting organisations that are working on the issue of gender equality. For some ways you can help speak up, check out this post from the IWD website.

Each of us can be a leader within our own spheres of influence and take bold pragmatic action to accelerate gender parity. We can collectively help women advance and unleash the limitless potential offered to economies the world over

💖Lets Celebrate Women who are doing the damn thing.

💖Lets inspire & empower the next generation.

💖Lets be the voice, take a stand and make change for those who haven’t that chance to speak up.

🙌🏼 All hail the badass babes holding up half the sky 🙌🏼

Let me know in the comments below. 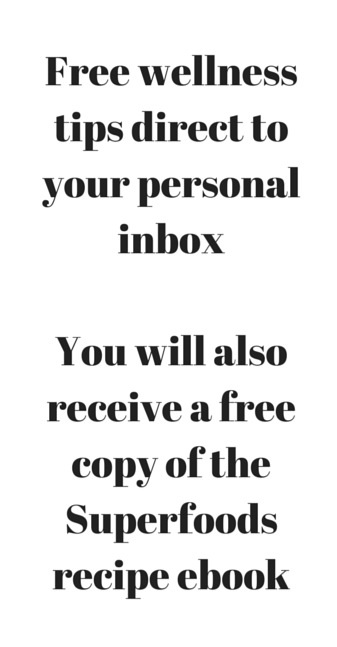 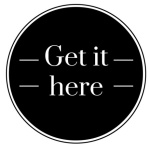 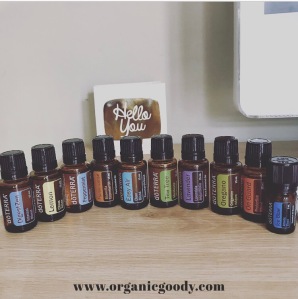 Shop for your Doterra Essential oils right here. Once you click through read the purple box under my photo so you can join my Oil Girl Gang and I can support you with your essential oils. If you are looking to grow a business with Doterra message me organicgoody@live.com

s u n d a y d i f f u s e r b l e n d 🌅 Refresh & Restore 💧 Citrus Bliss 💧💧 Balance 💧 Forgive ☀️
New moon ritual 🌙Write out all your desires for the month ( from the new moon to the full moon). 🌙Write these out on the new moon 🌙Review on the full moon – you’ll see what came into fruition, what worked, what didnt, what you will continue to pursue and what you will happily let go of. Writing down desires isn’t anything new but 🌙it’s a fun way to do it. 🌙It’s aligned with the lunar calendar – it doesn’t start at the calendar beginning and ends of the month – which can both be busy times. 🌙You have the power of the current sign behind you so you can look deeper into that and see what powers, qualities, attributes that zodiac has and use this to your advantage. ⚡⚡Writing down your intentions for the month is powerful. ⚡⚡ Whether you use it as a to do list or ‘let it go’ out to the universe to be manifested. Why not let the lunar help you out with it? What rituals do you do around the lunar calendar? #newmoonritual #newmoon2020 #newmoonJanuary #newmoonaquarius Photo @sarashakeel
M A N I F E S T A T I O N m a s t e r y ⚡We all know what we want ⚡ Dream up your dream. Be unapologetic. Be bold. ⚡ Get lit up by your life ⚡ Write it down in present tense. Specific but don't take the fun out of it by getting to nitty gritty. ⚡This is creating your blueprint for the universe & you to follow ⚡ ⚡Day 1 catch up - Manifestation Mastery challenge #manifestationmastery2020 w @manifestationbabe ⚡
F R A N K Y F R I D A Y ⭐ Some uses for the Frankincense Touch roller bottle ⚡Rub Frankincense on your hands, neck, or bottoms of feet for a soothing, warming effect. ⚡Apply topically to help reduce the appearance of skin imperfections. ⚡Massage on the temples throughout the day to balance mood. ⚡Roll on pulse points and forehead during yoga or meditation What's your favourite way to use Frankincense topically?
The space in which we live should be for the person we are becoming, not for the person we were in the past ~ Marie Kondo If I was at that 'level' already / if I had already reached that goal / if I was a woman who / if I was already that babe. How would I live? What things would I have in my home? What would my room look like? If course the golden q "Does it spark joy?" 🌠🌠Having a big burst of energy clean up the last few days. Have completed the kids room. Lots to donate, recycle and some trash. Still a lot more toys than I'd like - and the past few days all they've played with is a couple of cardboard boxes in the backyard they've made huts with and in the sandpit.😜 ☁️ Next few days my room - need to get rid of more clothes and sort some paperwork (not stuff I can just throw - A La Marie Kondo) It's home school papers & I need to get my accounts up to date. Before I have that end of financial year rush around in April. You'll find me under a mountain of clothes this weekend. How do you get your space organised for the year ahead?
B E D T I M E B L I S S ☁️ I shared a post the other day about how I wind down after a long day (Chandler bath pic) . Then I realised most of the oils I use are in the new Bedtime bliss Wellness box Enrolment Kit. For obvious reasons they support calm, grounded, relaxing feelings. This month the Enrolment kits are 20% off too. It's the perfect chance to try this kit out to support your sleep & your night time wind down. Rest, rejuvenate, and take on the world! The Bedtime Bliss Wellness Box Enrolment Kit includes: ☁️Lavender Peace® Restful Blend 15 mL ☁️doTERRA Touch® Peace 10 mL ☁️doTERRA Balance® Grounding Blend 15 mL ☁️Cedarwood essential oil 15 mL ☁️Vetiver essential oil 15 mL ☁️Fractionated Coconut Oil ☁️Introductory Packet & Enrolment I have a link in my bio - 'how to order essential oils' if you need any help message me 💕
%d bloggers like this: